Former President Pranab Mukherjee started a new era of dialogue between different political ideologies. It is quite difficult to understand each other’s ideologies in current politics. The respect of others’ ideology is lost somewhere from our culture.

This was occasion of Third Years completion of ‘Sangh Shiksha’ batch. Former President Pranab Mukherjee was the chief guest of the ceremony of RSS held in Nagpur, he conveyed the message to learners of RSS. If the RSS officials also take this message seriously with the learners, then the RSS can play a bigger and meaningful role in the future.

Mukherjee’s speech can be said about his fifty years of experience, especially his understanding of the Sangh. He clarified those points, which has become necessary to work on and improve the organization for the RSS. When Dr. Hedgewar built the foundations of the RSS in 1925, that time the circumstances and the situations were different. Since then, the time has changed completely. But the positive changes that should have come in the RSS did not come. Yes, the basic purpose is to see the distraction.

What he said in his brief speech is that is not only for the RSS but an important message for the entire political class of the country. If all political ideologies take it seriously, then they can return to the culture of dialogue in India. Pranab Mukherjee clearly said that tolerance and plurality are the real identity of India. In these two elements, India’s soul resides and our nationalism has developed on the basis of these principles. He said that respecting different opinions and carrying them together is not only the most important feature of Indian culture, but it is also the foundation of our parliamentary democracy. Hatred causes nationalism to weaken and intolerance will weaken our national identity. 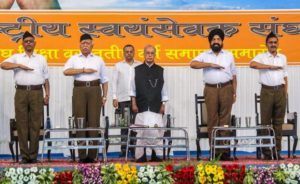 Pranab Mukherjee who followed the principles of secularism throughout his life, has tried to bridge the political divide that is spreading in the country by joining the organization. Today, the party in power is feeling of being supreme and the opposition moving towards any extent to be seen as a way of protesting against the party in power. In the face of denial of each other and move further is the loss of our country. Despite sharp parliamentary debates, we have a healthy tradition of giving respect to the opponents and giving a lot of attention to the issues raised. From the last six-seven years, almost all the parliamentary sessions have been washout, and sometimes rarely arise in a debate over the issue. We cannot imagine the fact that there is big trouble in Indian democracy.

Mukherjee’s message was not the name of the nation but the name of the RSS. He highlighted many bitter truths related to the RSS on the basis of his long experience. With time the RSS strayed from its original concept. The only reason behind this was the divided political environment with the fiery idioms of ‘Congress Mukt Bharat’ and ‘Sangh Mukt Bharat ‘.

Pranab Mukherjee is one of the most experienced politicians of our country. Without any hurricanes, reminding the glorious past of India, the prospect of pointing to existing problems in the humble accent from the platform, which is considered to be totally different from its mood, could not have been expected from him or not. Hope this message of the former President will be far-reaching and our politics will come out of their bitterness to some extent.

The objective of demonetization was political, we believe, not economic. We have further come to believe that the political objective was met: the BJP won Uttar Pradesh thanks to demonetization. [……..]

RSS is trying to expand their outreach by including Muslims and other communities in group of Pracharaks. The Rashtriya Swayamsevak Sangh is redefining the Muslim community as ‘Hindavi Musalman’ to [……..]