Yogendra Yadav started Swaraj Yatra in his home state Haryana. In this yatra Yogendra Yadav and his team of Swaraj India will cover more than 100 villages of Haryana. In political perspective Haryana is the best place for Farmers’ politics.

Swaraj India Party members, led by its national president Yogendra Yadav, on Sunday launched nine-day ‘Swaraj Yatra’ from Manethi village here to raise the issues pertaining to public interest. The yatra was flagged off by 95-year-old Capt Balbir Singh (retired). Yatra started on July 1st from Manethi (Rewari) and this will be ended on July 2019.

The party is demanding minimum support price (MSP) for every crop, employment to every person with full wages, restoration of ponds to water conservation and intoxication free villages to ensure happiness in villages. Several issues has been raised by Yogendra Yadav led Swaraj India such as irrigation, agriculture problem, farmer’s suicide, MSP, drinking water problems in villages. 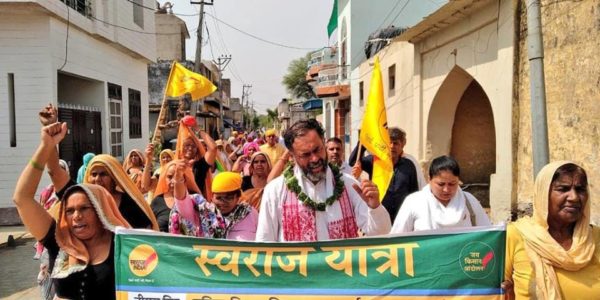 The yatra reached Balwadi village in the evening after passing through Kund, Padla, Basduda Nangal, Jamalpur, Dhani Kolana and Dhani Radha and many other villages. Addressing the people, Yadav said the yatra aimed at highlighting the public issues. He also interacted with villagers over various issues of cost of crops to farmers, full wages to labours, water conservation andclosing of illegal liquor shops and many others.

On the second day of Swaraj Yatra, team of Swaraj India celebrated as ‘Water Conservation Day’. Yogendra Yadav covered many villages of southen area where people are not having facility of drinking water. Level of ground water is continuously decreasing every year.

Yadav said that farmers‘ leaders from eight states will also join Swaraj Yatra. This is the first phase of the journey, which will be expanded in other parts of the country. During the press conference, Yogendra Yadav said that the country’s villages are still forced to withstand many miseries, away from the glare of development, they are suffering from backwardness. The time has come that now the people should abandon apathy towards the village and extend their hand towards them as ‘the village will rise and the country will grow’ Yogendra Yadav also appealed to every village from “Swaraj Yogi” which will give two years of life in this mission